“Coolest Conversations” can be heard every Friday on the Mighty Manfred program. It’s that series of interviews with artists who have earned themselves a “Coolest Song In The World” designation. This week, Manfred’s guest is Power pop band from Indiana, The Late Show. Formed in 1972 at North Central High School in Indianapolis and recorded their debut album Portable Pop in 1979. The group continued until 1982, after which the members reassembled under the name Recordio (and later, Rockhouse). They have played several reunion shows after Portable Pop was reissued on CD. Of course, it’s this week’s COOLEST SONG. Join Mighty Manfred on this week’s COOLEST CONVERSATIONS…Friday…in Little Steven’s Underground Garage”. 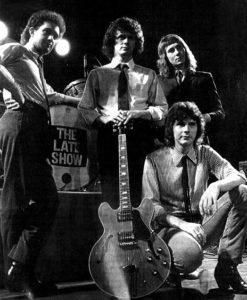