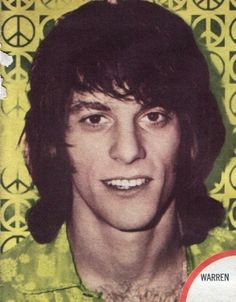 “I had just become aware that a person  from my past was in the band The Grass Roots that formed in 1965, A band  who had countless hits including  three top 10 singles in the Billboard charts.”Sooner or Later”, “Midnight Confessions” and “Lets Live for Today”. I met Warren Entner when I began photographing Quiet Riot, the first Heavy Metal band to have a # 1 Album “METAL HEALTH” on the Billboard charts. I did the single sleeve for there hit single “Bang Your Head”. Warren managed the band.. I had no idea of his past success in the Grass Roots and had no idea he was ever on The Dating Game which began airing in 1965. Gotta love the fashions from the 70’s. Just a little side note  from my ROCK SCENE…”  — Weissguy

Warren Entner from THE GRASS ROOTS on The Dating Game.

Must see Jimmy Durante introducing “Lets Live for Today” By the Grass Roots.