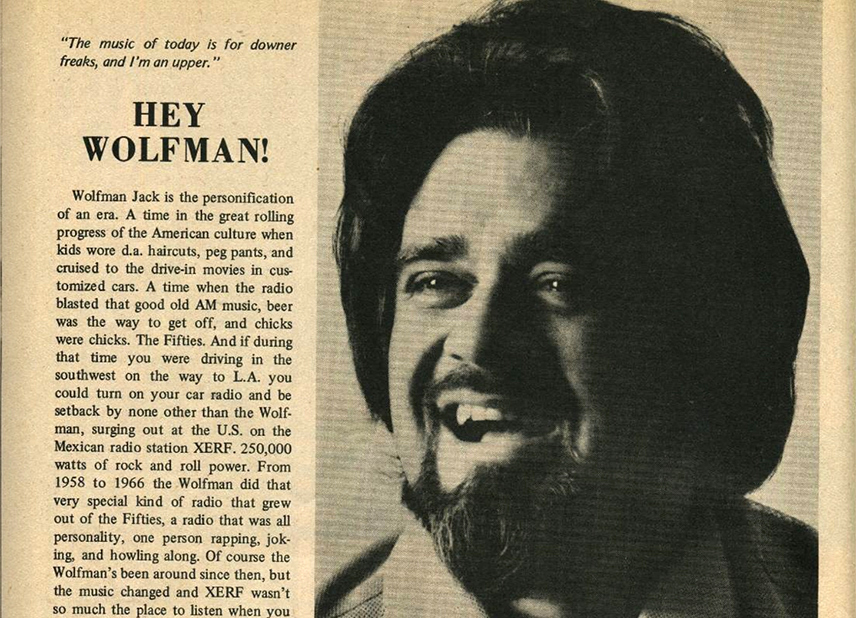 Interview with Wolfman Jack in the 1990’s

In this scene from the 1973 film, American Graffiti, the character Curt (Richard Dreyfuss) visits a radio station and receives some advice from Disc Jockey Wolfman Jack, (played by himself). The DJ pretends to be someone else, and when asked where the Wolfman is, replies, “The Wolfman is everywhere.”

This is an experimental film that was made while I was an undergraduate at the UCLA Film School in the early 1970s.  My Marin County partners in crime, Jessica Roth and Bruce McCauley, brought the vision of this era into reality…they lived it!  I regret Bruce died before the invention of UTUBE.  This film was even made before MTV…image that!

Nobody was combining motion picture film with rock and roll for theatrical release in those days. ” Shorts” were the little pictures that were seen in-between the feature films.  We were dismissed as CRAZY invaders from San Francisco by our LA colleagues.  The audio was made for quad-theaters (very hot in 1972) and thus takes some work to reduce 35 separate audio tracks into this format.  It was mono in the car and blasts to quad when Wolfman or Todd hits the screen.  We did a fantasy reveal on Wolfman in this short…due to the fact that very few people had ever seen him.  Lucas had not released his vision of 4th Street in San Rafael just yet.

For me and millions of other nocturnal radio listeners Wolfman was a nightly mystery of rock and roll interspersed with all kinds of babble and humor…so this is how we shared him.  Todd composed his song “Wolfman Jack” that honors and gives praise the number one crazy cat alive!  Someone tweeted that Todd played this for this 60th birthday party which had to be really fun for those lucky ones on Kauai.