Rock guitarist David Feinstein is the cousin of Ronnie James Dio. He joined Ronnie Dio & The Prophets as a rhythm guitar player, and the group eventually evolved into the band Elf.  Elf played until around 1975 when Ronnie joined Ritchie Blackmore’s band, Rainbow. In 1980 David went on to form The Rods and released many albums throughout the 80’s. David released his solo lp titled Bitten by the Beast. It featured a track called “Metal Will Never Die,” which is the very last recording to feature Ronnie James Dio’s vocals. In 2017 David recorded an album dedicated entirely to Ronnie titled Hail and Farewell.

DRF:  Actually, it was recorded about two years ago.  I lot of people think that I wrote the song about him.  But what happened, was that for years Ronnie and I talked about doing some music project together, like an ELF reunion, or a guest appearance on a Rods album, or a solo album.  We wanted to do something, but he lived 3000 miles away from me, so that made it a bit difficult.  He also had a very busy schedule.  But when we would see each other, we would always talk about it.  In my mind, I always wanted to do something and he did too.  And then a couple years ago, his mother become ill, so he was coming back home pretty frequently.  I got a call one day and he said he was going be in town for a few days and he would be able to sing a couple of songs.  Coincidentally, I had just written “Metal will Never Die” the day before he call.  Carl (drummer of the Rods) and I were in the process of putting together a new Rods record.  So, the next day I got together with Carl and told him that Ronnie was coming over, so we need to pick out a couple songs that he can sing on.  But before we did that, I wanted to make a demo of the song that I just wrote because I didn’t have it down on tape yet and I didn’t want to forget it.  So we put together a demo version and when we finished it, I said this is one of the songs that Ronnie has got to sing.  It would be perfect for him.  So we chose that songs and another one, which will be on the next Rods record.  The next day, I picked Ronnie and Wendy up at the airport and gave him a CD of two songs that he had never had heard before.  We didn’t listen to them on that night, because he just flew in.  We just socialized and had a few beers.  But then the next day, we came into the studio and he put the songs into a boom box and listened for a bit, and then did a world class performance on both of the songs.  It was unbelievable.  But that was the way that Ronnie worked.  I was exposed to that in working with him before, but Carl hadn’t.  And Carl couldn’t believe that Ronnie could just go in a nail it right away.  Ronnie also had a unique talented of knowing exactly what a song needed.  And that’s what he did with “Metal Will Never Die.”  To see full interview by Thomas S. Orwat, Jr. click here 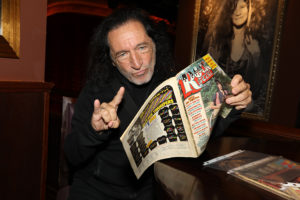 For more on David go to his Facebook page