Kelly Hansen’s first musical memories go back to riding in his mom’s convertible ’68 GTO and hearing the contemporary pop music of the times on the radio. “I accidently got into singing,” he says. A family friend that played guitar and always carried an acoustic asked Kelly to sing a song with him one day at the beach. He then asked Kelly to join his band playing in rec centers and school dances. He started making a living playing in cover bands, until eventually he joined the band Hurricane. Hurricane disbanded when their label went bankrupt and his next big gig was with Foreigner. The band had been dormant for a few years at the time, so he rehearsed with the band and it took off from there. “It hasn’t stopped since and that’s really mind-blowing to me.” 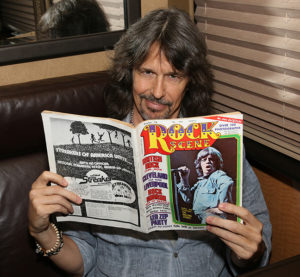